Brought to you by Cloud HR Software experts

Optimising The Future of Work: The Human-Automation Collaboration

Apparently you can’t solve the ‘how to automate work’ problem by thinking solely about automation replacing jobs. This is the premise behind Reinventing Jobs: A 4-Step Approach for Applying Automation to Work by Ravin Jesuthasan, Managing Director at Willis Towers Watson, and John Boudreau, professor and Research Director at the University of Southern California's Marshall School of Business and Center for Effective Organisations. Based on their decades of experience helping companies transform approaches to work and leadership, Reinventing Jobs offers a new set of tools for applying automation and artificial intelligence in today’s organisations. In this Blog we will examine the 4-Step framework for applying automation to work outlined by Jesuthasan and Boudreau, who believe that 'simply asking which humans will be replaced by automation fails to take into account how work and automation will evolve.' Now let's continue our exploration of this series on whether to automate or not to automate tasks and processes across the employee lifecycle.

Reinventing Jobs gives leaders and HR Professionals a more precise, planned and actionable way to decide how, when, and where to apply and optimise work automation. Jesuthasan and Boudreau assert that the very nature of an organisation will require rethinking, which means fundamental changes in the definition and execution of leadership. They also advise that everyone should approach their own careers as a constant process of deconstruction and reinvention as advances in automation continue to challenge the very essence of 'human work.'

The four-step framework the authors propose; deconstruct, optimise, automate, and reconfigure, illustrates how organisations can reinvent the manner in which work gets bundled into jobs and through which they can create optimal human-machine combinations. The book provides a roadmap by which leaders can (and need to) continuously re-examine what a job really is. It also provides the tools for identifying the pivotal performance value of individual tasks within jobs and how these tasks should be reconstructed and redesigned into new more optimal combinations.

Answering The Difficult Questions About Automation

According to Willis Towers Watson's research, once the decision has been made to adopt automation and artificial intelligence technologies, leaders face difficult questions about how to implement that decision:

In 'Reinventing Jobs,' the authors suggest that leaders need a new set of tools to answer these daunting questions. Going beyond traditional concepts like a 'job,' readers discover that automation calls for a re-examination of what a job actually is, what 'work' will entail going forward, and they then learn how to determine variations of tasks within jobs so as to reconstruct those elements into new and different combinations. In addition, transcending the ongoing debate about humans being replaced by machines, the authors show how smart leaders are optimising human-automation combinations that are not only more efficient but generate higher returns on improved performance. And they do so without forgetting the human factor and ensuring that they take care of their people along the way.

Want to ensure that you take care of your people as you embark on the HR automation journey? Your HR toolkit needs a solution that enables you to manage the reinvention of jobs at every stage of the employee lifecycle. Take a look at our Performance Management software solution.

Based on groundbreaking primary research, Reinventing Jobs provides an original, structured approach and a new set of tools for applying automation and artificial intelligence in your organisation. Jesuthasan and Boudreau's practical four-step framework provides a roadmap for your organisation to transition to the new world of work.

"Reinventing Jobs cuts through the hype and hysteria and shows leaders how to apply automation and artificial intelligence in their organisations. Jesuthasan and Boudreau are the clear-eyed guides every organisation needs," says Daniel H. Pink.

To achieve the optimal combinations of humans and automation, leaders must implement the following four-step framework: 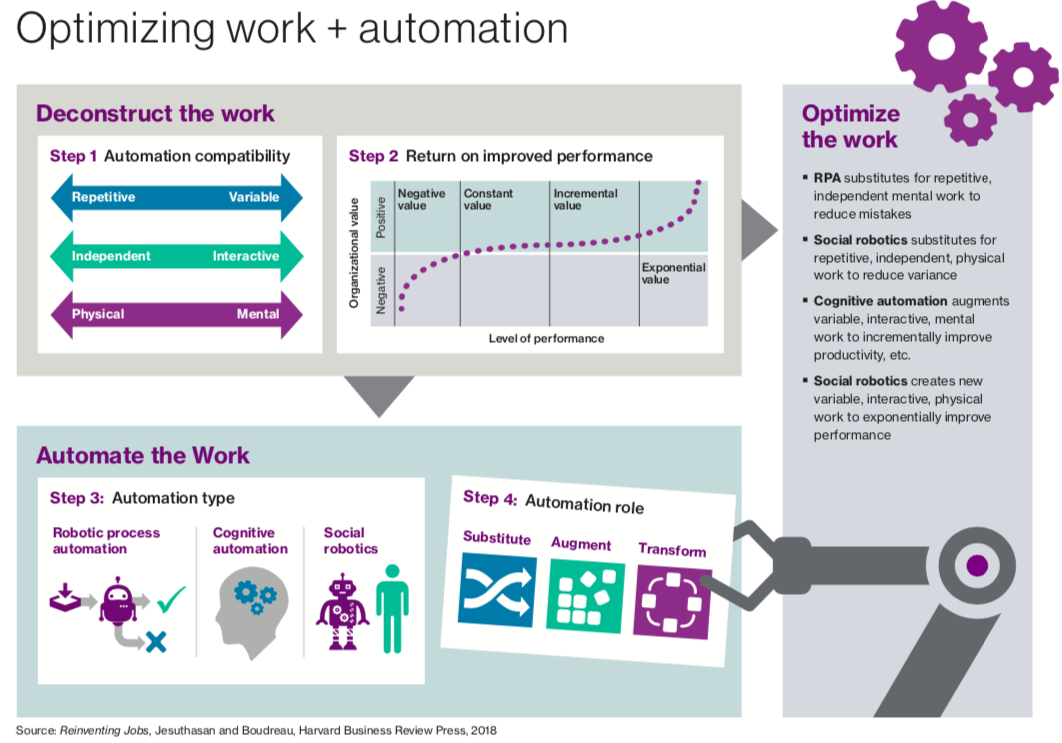 Step One: Deconstruct the Job

Contrary to popular belief, automation seldom simply replaces the people doing a job. Instead, existing jobs are reconfigured, splitting their duties and responsibilities between human and non-human collaborators. The first step in this process requires leaders to break down each existing job into its key work tasks.

For example, a bank teller’s tasks include:

Once a job has been deconstructed, leaders must determine which tasks are best suited for automation. They need to identify where each task falls along the three dimensions of automation compatibility:

Even when a task is repetitive, independent, or physical and can be automated, that doesn’t mean it should be automated. Too often, companies wrongly automate tasks simply because a robot is capable of doing the work. A more productive approach realises that automation is only worthwhile if it provides the payoff that impacts strategic goals that include cost efficiency (but often go well beyond it). To determine the optimal role of automation, leaders must estimate its return on improved performance (ROIP).

ROIP is a spectrum determined by two things: the level of task performance and the strategic value of that performance. When depicted on a chart, the ROIP spectrum appears as a curve with value as the vertical dimension and performance level as the horizontal dimension. It can be divided into four sections:

Every leader should become familiar with three categories of automation:

Are you aware of how much your business can benefit from HR automation during the onboarding phase of the employee lifecycle? Take a look at our free eGuide about Employee Lifecycle Automation that outlines everything you need to know about onboarding success. Better still, we offer our Employee Onboarding software FOR FREE! Request your personalised demonstration here.

The final step in the framework requires leaders to decide how to optimally combine human and automated work. Leaders must first understand the three different roles that automation can play:

1. Substitute for human work: In scenarios where the task is repetitive and independent with a negative, constant or incremental-value ROIP, automation can replace human workers. For example:

2. Augment human workers: In scenarios where the work is variable with incremental or exponential-value ROIP, automation can be used to help improve human workers’ performances. For example:

3. Create new work: In scenarios where the work is variable and interactive with incremental or exponential value ROIP, automation can generate new, unique opportunities for humans to dramatically enhance their value. For example:

Once leaders understand the four-step framework, they need to learn how to apply it cohesively within the organisation. The following six questions provide a succinct overview of how to reinvent a job with automation:

3. Is the ROIP (return on improved performance) of the task:

4. Which of the following types of automation are available for the tasks:

5. Will automation substitute workers, augment workers, or create new work?
6. What is the optimal way to reinvent this job, combining human and automated work?

When viewed through the above lens, human-automation collaboration feels more logical, less scary, and more like a process that can have positive benefits for workers. However, as the above framework also makes abundantly clear - getting it right will require sound, intelligent, well-research and well-planned implementation by HR professionals and leadership. Easier said than done... In the next blog in this series we will look at the impacts automation will have on leadership and the very nature of the organisation itself.

Is your business ready to leverage automation in your organisation so that you can free your employees from repetitive, manual tasks forever? We've created an eGuide that visualises the entire employee lifecycle and how you can design an intelligent workplace with a healthy human-automation collaboration.